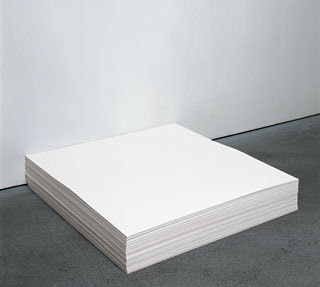 New year. Clean slate.
I will fill this first one with Felix Gonzalez-Torres, and focus on the possibilities he has given me by handing out candy and posters.

I have come across his candy in many different exhibitions (among them: Guggenheim, New York, 1995; Astrup Fearnley Museum, Oslo, 2002; Venice Biennale, 2007).

The first time I stood next to one of his shining carpets that look like minimalist sculpture, but are made from sweets wrapped in cellophane, I had to figure out whether or not it was ok to take one. And the moment of insecurity that I experienced then, is a very important aspect to all his different candy pieces.

But then another question emerges: - How many will it be ok to take?

Getting something for free like that, in a situation which tends to be about not touching very costly artwork, inspires thoughts about the artwork as a commodity, and about modesty versus "unlimited" sensuous pleasure.

In Felix Gonzalez-Torres's work, mouthfuls of hard, sweet candy, when put together in great numbers, neatly shaped on a gallery floor, become pieces of installation art that not only challenge our desire to own and acquire. They also carry a distinct political message which I will get back to at the bottom of the post.

This golden curtain of beads on strings forms a beautiful, gleaming surface. Its shape is very simple, - like the candy carpet above. And - like the candy piece - it requires viewer participation: It needs your body to brush through the beaded strings. You may be curious about what you can find behind the curtain, but it is most important that you savour the moment when you feel the weight of the beads against your hair and your skin...


As far as I remember, the 1995 retrospective at Solomon R. Guggenheim Museum in New York was the first time I encountered Gonzalez-Torres's work. And I remember very well the inspiration I felt as I sat down somewhere on Frank Lloyd Wright's spiralling floors to fold the blank sheet of thick paper I had picked up from one of the stacks that were displayed. I could take a part of Gonzalez-Torres's sculpture and add something to it. Not really making it my own, but helping it fulfil itself...


Here somebody is rolling up a sheet from a stack of printed paper.


And here is where another sheet from the same stack ended up.


This photographic billboard serves well as an example of Gonzalez-Torres's attention to context. The very intimate subject matter of the huge photo is accentuated by its harsh urban surroundings and by the contrast it forms to the commercial images we are used seeing on billboards. Walking down the concrete pavement, glancing up at the board, one may be reminded of one's own feelings and thoughts about love and intimacy, and the private will then stand out as soft and fragile against the public streetscape.

But knowing that Felix Gonzalez-Torrez lost his partner to AIDS prior to the making of this work, and that he died from AIDS himself in 1996, our reading of this billboard takes another direction, towards notions of loss and a focus on prejudice against gay love.

The same perspectives can be applied to his candy work. With these biographical facts in mind, the title "Untitled" (Placebo) gets a more literal meaning, perhaps referring directly to the substitution of lost love by sweet candy.

(More about the "Placebo" series at the International Sculpture Center and the Williams College Museum of Art)
Lagt inn av CELINE kl. 10:10 PM