Look at these objects. Simply placed next to each other on an anonymous surface, against a dark background. Vessels that were quite mundane in the middle of the 17th century when Zurbarán lined them up and made light shine in from the left. To us they are more exotic, but we can still sense the ordinariness that imbue them.


This simple, little painting was the one that made the strongest impression on me when I visited The Prado almost 20 years ago. That must have been because it communicates so clearly and directly. There are no allusions, no allegory that needs deciphering, just each object presented in its own right, all of them on equal terms.


And then there is the notion that these mundane objects carry a spiritual potential. - Through their simple beauty? - By the light that they reflect? Zurbarán's contemporary, Saint Teresa of Ávila said that "God may be found even among the cooking pots".

- Or as a lamb. On a slate. Ready to be butchered. According to the title, this lamb is the Lamb of God, Jesus: "Behold the Lamb of God who takes away the sin of the world" (John 1:29).


Again, Zurbarán's simple and direct rendering makes his message all the more powerful. Like the vessels above, this lamb is powerfully illuminated. Its tangled wool shines, and it retains its dignity, even when it lies there with all four legs trapped together.


How fitting to look at this painting today, at Epiphany. Later this evening I will remove my Christmas decorations and thus fully be on my way onwards in the new year. Hopefully, Zurbarán's elevation of everyday objects may inform my daily life to come. I wish to develop my ability to see beauty in the small things.

Against the backdrop of the top two paintings, this final still life looks almost too extravagant. But here, too, there is stillness and mystery. As cited at Agricola:

[. . .] its astonishing realism: every detail in every object is perfectly rendered without the objects losing their strong human quality, especially the basket which is truly exquisite.
[. . .]
It is this precise balance of solid, beautiful objects in empty space that creates the deep sense of stillness, purity, and mystery. And standing receptively in front of this painting evokes the same within the viewer.
Lagt inn av CELINE kl. 2:06 PM No comments:


Christian Marclay's 24 hour film work titled "The Clock" has been hailed as one of few good reasons to go see this year's Venice Biennale. It has earned Marclay the Golden Lion Award for the best artist in the Biennale, and it has generated a lot of interest in other venues where it has been shown. At times there were long lines of people on the street waiting to get in to see it when it was shown at the Paula Cooper Gallery in New York this winter (see Jerry Saltz's review about not standing the wait in cold weather, and Ben Davis about not getting in at all).

Most critics are stunned by the giant proportions of this work. Apparently, it has taken Marclay two years and the help of six full time assistants to piece together thousands of film clips that add up to 24 hours of footage. When the film is shown in galleries, it is synchronized with actual time, so that "film time" becomes "real time".

So far, I have just seen one unfavourable review of "The Clock".  - Tyler Green at MODERN ART NOTES: "The Clock’s facileness renders explicable the crowds that flocked to Paula Cooper Gallery for the work. Contemporary art is in the throes of a salon moment, a moment during which once-difficult conceptual work is watered down enough to be accessible for the art market and its hangers-on."


By watching the video clip from BBC above, or the excerpt from the film itself below, it may be possible to judge whether Tyler Green is right when he says that the concept of "The Clock" is just too easily accessible. - Or whether Christian Marclay's work is a rare example of complexity made beautifully simple, - to give a unique experience of time, that very precious commodity that we tend to take for granted and at the same time constantly are conscious of.


Since I have not had a chance to see "The Clock" "live", I was happy to discover these YouTube clips. They give a certain impression of what the work is about. But flicking through YouTube, watching a little here and a little there while wondering if I really have time to be surfing around, that makes it quite clear that a crucial part of experiencing "The Clock" in a gallery setting must be the decision one has made to sit down quietly in the dark for an extended period of time. - To just stay there and watch, without doing anything else, and thus become aware of each precious moment.


I'll stretch my summer by looking at paintings from Holmsbu in Eastern Norway. The one above was painted by Oluf Wold-Torne in the summer of 1911, the first of many summers when he and other artists came to Holmsbu to work.

By blurring out details from the foreground and simplifying the foliage and shrubs, Wold-Torne leads our attention towards the hill and mountains on the other side of the fjord. Horizontal lines create a calm sensation, and the central stretch of water is framed by trees on the right and sailboats on the left. A large portion of the painting is blue sky which is hazy enough to render that feeling of summer comfort and reverie that I so much want to hold on to now that fall is approaching.

In this painting by Thorvald Erichsen some of the pink rock that is such a characteristic feature of the Holmsbu area, can be seen bathing in the evening light across the fjord.

A gallery that houses works by Oluf Wold-Torne, Thorvald Erichsen and Henrik Sørensen (who are considered the three most central Holmsbu Painters) has been built in the woods that stretch inland from the fjord. It is clad in the local pink granite, and it lies well camouflaged on top of a steep trail.

At the back of the building a large window lets the untouched landscape become an important part of the total aesthetic experience that includes architecture, landscape and paintings, among which some depict the same landscape as one can see through the window (like the one below).

Elmgreen & Dragset, "The One & The Many"


I like artworks that demand participation: Settings that I become a part of or works that are only realized if I engage myself in them.

I very much enjoy showing "Boy Scout" (2008) to kids that visit Bergen Art Museum, where I work as a Museum Lecturer.

So I think that I will just have to go to Rotterdam to experience "The One & The Many" before it closes on September 25.


Then I believe I will have to go by boat to an old submarine wharf, where I will walk down a spooky "subway" tunnel that will take me to a ghetto-like city scape inhabited by people that I would not feel safe to encounter in real life.

I will go for a ride on the Ferris wheel and peek through the windows to see what the tenants in the apartment building are up to, and if possible, I will enter the building to take a closer look.

According to Sjarel Ex, who presents "The One & The Many" in the following video, I will get so engaged in the stories that are played out in the work, that I will continue thinking about the people I have encountered long after I have left the place.


In this next video, Michael Elmgreen and Ingar Dragset talk about "The One & The Many" and another work they will have going for the next year in front of the Rotterdam City Hall: "It's Never Too Late To Say Sorry".

Christoph Marthaler, "plus minus zero"

This year's Bergen International Festival is nearing its end, and I have not had time to see by far as many shows as I would have wanted to. But last night I went to a performance that was presented as theatre: Christoph Marthaler's "plus minus zero". What a lucky choice! - Though maybe not a very likely one, since I had read an unfavorable review in Bergens Tidende the same morning. Too bad that paper sends a theatre critic to review a work like this, and not an art critic. Because complaining about lack of storyline and coherence seems to me completely beside the point as long as Marthaler communicates precisely through his break with theatre convention.

The seemingly incoherent mix of scenography viewed as installation art; choir music performed in human tableaux;  text presented in different languages, and thus enhanced, sometimes like poetry; simple movement repeated in dancelike patterns; Inuit stories told without translation (but with clues given through body language); the slowness, stillness and meditation; - it all suggests notions of a world view so different from western rationale that we simply cannot understand it through linear, analytic communication.
Lagt inn av CELINE kl. 7:45 PM 2 comments: 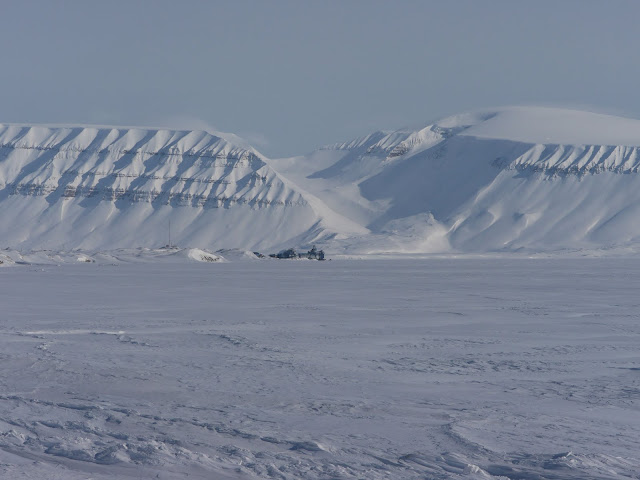 I went to Svalbard for 10 days this Easter. It was my first time there, and I had expected to see spectacular landscape and beautiful light. But I had not been able to imagine just how intense and different the arctic light would be, and I was surprised by the calm, cloister-like feeling I got from moving around in the wide, white expanse. 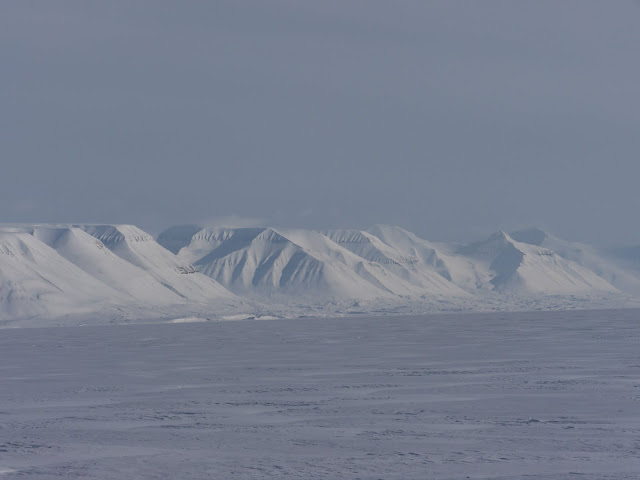 With no trees and simple, consistent lines, the Svalbard landscape reminded me of the hills in New Mexico, the way  Georgia O'Keeffe painted them.

One evening, as I sat in a cabin looking across the ice covered fjord at very light blue mountains that were barely discernible from the late night (but light!) evening sky, it struck me how difficult it must be to convey such simple beauty in painting. I know that many artists have tried, and I saw quite a few attempts in Longyearbyen, but most often I thought the result became too sweet and cliché. 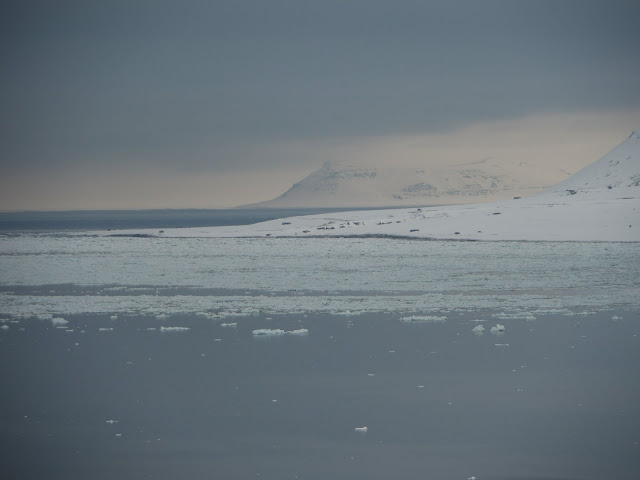 However, in the departure hall in Longyearbyen Airport, a three part work by Trine Mauritz Eriksen sums up the arctic light and landscape very well. It is titled "Moderato Cantabile", a musical term that I think covers a similar feeling to that calm, almost meditative mood I mentioned above.

Trine Mauritz Eriksen, "Moderato Cantible", Svalbard Airport, Photo: Birger Amundsen.
Having experienced some grey days during my stay, and knowing that winter in the Arctic is completely dark, save the Northern Lights, I very much enjoyed the play of light and subtle colors in her non-figurative interpretation, made from twisted strips of colored wool.
Lagt inn av CELINE kl. 4:28 PM 1 comment: